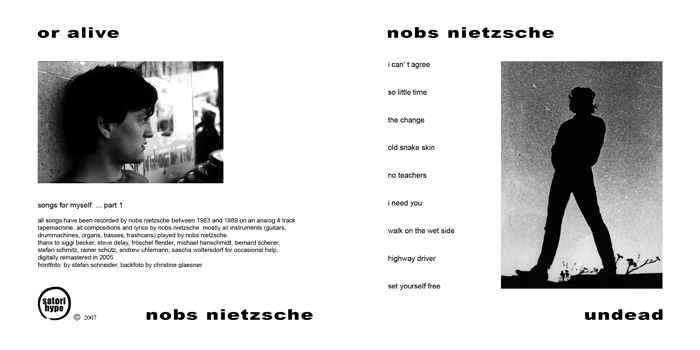 DOWNLOAD ONLY FOR PRIVATE USE
2007, COPYRIGHT BY SATORI HYPE RECORDS

Nobs Nietzsche – undead or alive
songs for myself … part 1

to get the whole album including coverart.

for those who don’t like 128Khz mp3: you can purchase the CD-R @ the Satori Hype Mailorder.

„Undead or alive“ is a release that‘s coming too late and won‘t fit at all in the overall musical context of Satori Hype Records. It‘s vintage 80ties music from a time when nobody made self titled releases but a few cassettes. Folk‘n‘roll over cheap beatboxes, Robby-Krieger-like-guitars, thumb-sketched songs with rockstar attitudes. Recorded in a bedroom. It is subtitled with „Music for myself“.

nobs nietzsche has been the younger appearance of the artist we know today as fatagaga.

foto on front by Stefan Schneider, foto on back by Christine Glaesner

> Order the CD-R directly via